Today, nobody believes in reality. Fiction remains stronger than fact. All stories are true - satires in particular. Imaginary heroes are more dependable than the other kind, living or dead. Whatever you need is unavailable, so choose the brighter new tomorrows that you want instead. FAX 21 is a muse (news) blog-fest of science fiction concepts and fantasy ideas for genre enthusiasts. Paradox free since next year!

by Christopher Geary and Stephen Lee

Made on a tiny budget by Toothpick Media and Pocket Money Productions, Ultimate Marvels cast little Tommy Cruise for a reduced fee in superhero flick Ant-Boy! We interview the Cruiser while he’s immersed in his new role.

What’s it like being under a movie director’s magnifying glass, again?

“It’s great. Awesome! I look up and wave. The director looks down at me and squints a lot. I beg him, like, not to shout at me.” 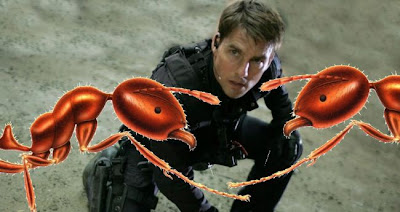 How do you get on with the film crew?

“I have to be careful when they’re busy. I don’t wanna get trampled on if they fail to see me. The sound guy keeps telling me to speak up while techies adjust matchstick–boom microphones - and when I say micro… I mean a really miniature audio pickup. It’s the littlest one they have. The cameras are actually microscopes, of course.”

Is your character half-ant, half-man, like the ‘Mant’ of Joe Dante’s movie Matinee?

“No! Nothing of that sort... I’m playing the smallest action hero, not a comedy cliché.”

Will you be doing all of your own stunts, as usual..?

“Oh, sure - I grew up on an ant-farm!” explains Tommy. “I’ve been riding them six-legged steeds and bronco bugs since I was knee-high to a grasshopper.”
Since you were..?
“Well, you know - maybe I’ll be a growing boy, someday.”

As a big… oops, sorry! As a Hollywood star, do you have a trailer?

So, your mini-superhero will be fighting the Human Centipede?

“Not the 'full sequence', no. Just the first version…”

Your costumes for the movie are made by Elves & Sons, right?

“They make all my outfits, actually. It’s hard to find a human tailor with perfect eyesight for threading nano-needles.”

Does Ant-Boy really have a secret base made of Junior Lego?

“Oh yeah, absolutely! All the models… I mean the sets, are customised for my height by the studio’s artists, you know.”

Matchbox’s bid to provide the cars fell short of your needs. What happened there, Tommy?

“Well the Mini coupes they made were simply too damn big for us so we shrunk the script and wrote those scenes out.”

Are there other villains or adversaries, and will there be any marketing areas to exploit?

“Bad boys, yes… I go up against the 'Ant Hill Mob', but the boys toys designed to cash-in on the movie were banned in case infants swallowed them. Scale is a difficult subject. I find it challenging after other movies where I am at altitude, and this little flick brings me down to earth.

Created using bulletin writings and unofficial reportage, FAX 21 describes the unknown, yet strangely familiar, on various alternative (Earth) worlds. It's still the 21st century - but daily life, the universe and nearly everything else is different now, and more or less anything is possible... (especially SF spoofs & in-jokes). Have fun, and if you can't be good, be careful out there. 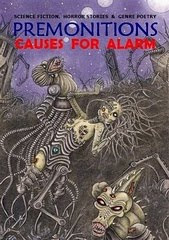